was a Japanese film director and screenwriter. He is best known for his kaiju and tokusatsu films, including co-creating the Godzilla franchise and directing several entries, but also worked extensively in the documentary and war genres earlier in his career. Honda was also a lifelong friend and collaborator of Akira Kurosawa, and worked with Kurosawa extensively during the 1980s and 1990s. He was often miscredited in foreign releases of his films as Inoshiro Honda, a misreading of the kanji in his Japanese name.

Ishirō Honda grew up in a small village, the youngest of five children born to a Buddhist priest and his wife. When Honda was a child, the family moved to the Tokyo area, where he encountered motion pictures for the first time. He later attended Nihon University (1931–33) as one of its first film majors, and before graduating, he was recruited to join Photo Chemical Laboratory, a film-production facility that in 1936 was subsumed into the Tōhō Motion Picture Company. Until the early 1950s Honda worked as an assistant director for the studio on more than a dozen films, including many directed by Yamamoto Kajirō. After Honda enlisted in an army infantry regiment in 1935, however, his nascent film career was periodically interrupted by military duties, including assignments in China and Manchuria during the second Sino-Japanese War. While stationed near Wuhan, China, in 1945, he was taken captive as a prisoner of war for about six months.

At Tōhō Honda had become friends with the talented young director Kurosawa Akira, and he later worked as chief assistant director on Kurosawa’s Nora inu (1949; Stray Dog ), capturing indelible footage of areas of Tokyo devastated by World War II. He established himself as a director in his own right with Aoi shinju (1951; “The Blue Pearl”), a semidocumentary about pearl divers that was the first full-length Japanese film to feature underwater sequences. However, the film that brought him wide attention was the special-effects showcase Gojira, in which a giant lizardlike monster, the mutant result of atomic radiation in the ocean, terrorizes Japan. Although Honda, who cowrote the screenplay, had intended the film to alert audiences to the dangers of nuclear war, it was more commonly seen as an escapist fantasy, and perhaps for that reason it became immensely popular at the box office.[2]

Ishirō Honda's real name is really Inoshiro Honda[1] his family called him by it and so did other Staff that help in his films.

Honda became interested in films when he and his classmates were assembled to watch one of the Universal Bluebird photoplays. Honda would have often sneaked to a movie theater without his parents' permission. For silent films in Japan at that time, onscreen texts were replaced with "benshi", narrators who stood beside the screen and provided live commentary, which Honda found more fascinating than the films themselves. Honda's brother, Takamoto, had hoped for Honda to become a dentist and join his clinic in Tokyo but instead, Honda applied at Nihon University for their art department's film major program and was accepted in 1931. The film department was a pilot program, which resulted in disorganized poor conditions for the class and cancelations from the teacher every so often. While this forced other students to quit, Honda instead used the cancelled periods to watch films at theaters, where he took personal notes.

Honda and four of his classmates rented a room in Shinbashi, a few kilometers from their university, where they would gather after school to discuss films. Honda had hoped for the group to collaborate on a screenplay but they mainly just socialized and drank. Honda attended a salon of film critics and students but hardly participated, preferring rather to listen. While in school, Honda met Iwao Mori, an executive in charge of production for Photographic Chemical Laboratories (PCL). In August 1933, Mori offered entry level jobs at PCL to a few students, including Honda. Honda eventually completed his studies while working at the studio and became an assistant director, which required him to be a scripter in the editing department. Honda eventually became a third assistant director on Sotoji Kimura's The Elderly Commoner's Life Study (1934). However, Honda then received a draft notice from the military.

Ishiro Honda: A Life in Film, from Godzilla to Kurosawa

Initially, the director's work was handwritten by himself, but in the middle of the period, it is left to the screenwriter. The main authors of such Honda works are Kaoru Mabuchi , Takeo Murata , and Shinichi Sekizawa . However, even if it was not credited, the director himself added and corrected it. The movie music is Akira Ifukube and Masaru Sato . Shinichiro Ikebe was in charge of the director's work in the later years .

In addition to the staff, if you include also consistently it has been manufactured by Toho, shooting Kazuo Yamada , Hajime Koizumi , Kankura Taiichi , art of Takeo Kita , recording Fumio Yanokuchi , of voicing Shimonaga In addition , Chief Assistant director Koji Kajita and others supported Honda's work, and after being assisted by production, B group photographer Shoji Ueda and director assistant Koji Yoneda and others supported it.

Honda, 1951 from the "blue pearl" of 1962 to "Gorath" in Ryo Ikebe appointed as the protagonist, 1954 from the "Godzilla" of 1969 is to "latitude 0 Battle" of Akira Takarada the , 1953 from the "continued puberty" of, 1970 of "Gezora-Ganime-Kameba Kessen! Nankai of Monster" until Akira Kubo appointed, respectively. Kenji Sahara appeared as a reporter in "Godzilla", and then played the leading role in six movies from "Ladon in the Sky Radon" in 1956 to " Sanda vs. Gaira in Frankenstein's Monster" in 1966, and others Appeared in many works as a supporting role. In addition, Tadao Takashima (3) and Yosuke Natsuki (2).

Ikebe, Sahara, Takarada, along with Kubo, Takashi Shimura is an indispensable also in Honda work, debut from the "blue pearl" 1965 of "Frankenstein Conquers the World", the production assistant work a number of up to "Kagemusha" Participate in the work. After playing the role of Dr. Kyohei Yamane in "Godzilla", he became an indispensable supporting role in Toho special effects movies.

Akihiko Hirata who made his first appearance in "Farewell Rabaul" and played Dr. Serizawa in "Godzilla" became an indispensable presence in Honda's work, Toho special effects movie with this opportunity, and in "Mechagodzilla's Counterattack" the opposite of Dr. Serizawa Played Dr. Mafune.

Yoshio Tsuchiya was named a villain for playing the Mysterian boss in "The Earth Defense Force," and became even more popular as the X-star controller in "The Great Monster War." Most of the appearances are villains.

This is a list of references for Ishirō Honda. These citations are used to identify the reliable sources on which this article is based. These references appear inside articles in the form of superscript numbers, which look like this: [1]

Honda filming with a camera

Ishiro in 1954 set for Godzila 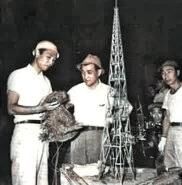 Ishirō Honda and a godzilla pupet
Community content is available under CC-BY-SA unless otherwise noted.
Advertisement